Dave Van Patten’s name is pretty much synonymous with Long Beach. Almost as much as Snoop Dogg’s is. Well, ok, maybe not as big as Snoop, but you can’t live in Long Beach without having at least SEEN Dave’s work. Seriously. It’s everywhere.

Primarily, his murals. They’re hard to miss. His often colorful, and often quite large murals grace the outside walls of Long Beach establishments like the famous Alex’s Bar, or walls on 4th Street’s Retro Row. He’s even managed to bring a bit of custom home town feelings to some of the local Whole Foods and Starbucks locations.

Dave was a natural fit for this project because he’s put his music fandom front and center in a lot of his work. He’s done album art and posters for many bands, created a series of fantastic fake album covers for bands performing at the Music Tastes Good Festival, and makes music himself under the name Free Tree. Check out his answers to my questions, plus an excellent playlist of music he likes down below.

First album you bought?
“Metallica: Ride the Lightning.” Bought in 4th grade. I was a young metalhead.

Last album you bought?
“Chrissy Zebby Tembo: My Ancestors.” He’s a psych rocker from Zambia in the 70’s. They called the genre Zamrock.

In high school it was Sgt Pepper’s. That’s not even my favorite Beatles album now. Revolver is.

In early, early college it was Le Shok “we are electrocution” and Velvet Underground “Andy Warhol”

In early mid college it was Elliott Smith “either/or” and Nick Drake “Pink Moon”. I waited in line for 4 hours to see Eliiott perform at a Mexican dive bar in Silverlake a year before he died.

In mid college it was Woody Guthrie “Asch Recordings”. I ate up everything Woody said.

Late college, I’d have said Daniel Johnston “Hi How Are you? ” or The Clean “Anthology.”

Post college I would have said MBV “Loveless” one year, or Jesus and Mary Chain “Psychocandy” another year. Animal Collective “Feels” another year.

Mid late art career, White Fence, “growing faith.” This album was a huge landmark and changed everything for me. For the first time I heard something that had the pop sensibility of the Beatles, the garage surf punk fusion of Ty Segall, the experimental nature of VU, and the lo-fi home recording mentality of Daniel Johnston. I hadn’t recorded music in years, but after hearing this, I was inspired to start recording again.

And then there was the angry, depressed, wild, belligerent 2 year drunk phase where I drove around drinking road sodas and blasting early Stones so loud that I blew out my truck speakers eventually, but the buzz only made it better. I LOVE the Stones, but they kinda just make me wanna be a bad person. Like drive around and drink, and yell at slow people and fight with my girlfriend. Don’t worry, I’m over that and thank God no one’s dead and I’m not in jail. I was really depressed and expressed it through self destruction.

Transformation to Good period, Spacemen 3- changed my world. I started to enjoy peaceful music again. “Forged Prescription” is their best album. They are pioneers of shoegaze, space rock and Neo-psych, and they were doing it all in the early 80’s at least 5 years before anyone else was doing it. Their early stuff is LOUD drone-y psych-fuzz, which I love, but they really dug into me deep when I heard their spiritual, mellow psych-hymnals.

Recent Year, the Lentils “Brattleboro is Flooding”- This is a near perfect album.

How important is music to your creative process?
Music is as important to my art process as the art itself. Sometimes I don’t even like art anymore. It depends on my mood. But I am damn good at it and it’s my job. But music is the only thing that gets me through. I don’t know much about obscure visual artists because I don’t really give a shit. But I know everything about music- because searching for new music is all that I do. Like a crackhead digging through a deep well, picking out little nuggets as I dig deeper and deeper. And I hate 95% of what I find because I’m picky. But the 5% is worth it.

And there’s Spacemen 3. They’re not on Spotify, but I bought all their albums and made a best of playlist:

Come Down Softly to My Soul
I Believe It
So Hot (Wash Away All of My Tears)
Lord Can You Hear Me?
Walking With Jesus
Come Down Easy (demo version)
Transparent Radiation
Call the Doctor
Feel So Good
Feel So Sad (reprise)
Hypnotized
Sometimes 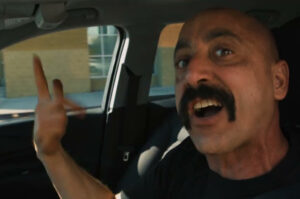 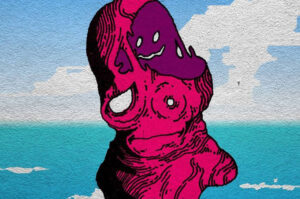 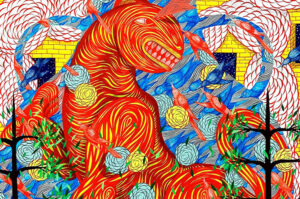 Andrew Schoultz has been in my orbit for years now. Not only have I followed his art for a while, but it turns out we 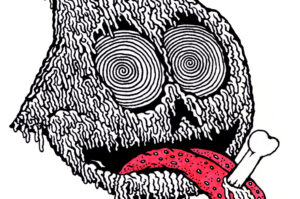 Rob Corradetti (the man behind Killer Acid) has built up quite a body of work over the years. He’s amassed an impressive musical discography, featuring