I first heard about artist Matt Gondek through his podcast “Clean Break”. Honestly, I think it was due to an artist I follow having posted something on social media about having been on his podcast. What I stumbled on was an archive of over 100 episodes featuring many artists whose work I love. Alex Garant, Jaune, Scott Listfield, Buff Monster, and many others have all sat down with Matt to discuss art, business and many other things. From there, I discovered that Matt was actually a talented and experienced artist in his own right.

A self-taught artist, he opened his own clothing and art gallery at 30, but then moved to Los Angeles at 31 after realizing that wasn’t where his true passions lied. He instead focused his time and energy on his art. His work is frequently referred to as a form of “deconstructed pop icons”. You’ll frequently see pop culture figures like Homer Simpson or Mickey Mouse exploded (psychedelically, as opposed to violently) into bright bursts of color on the canvas. These bright colors and clean lines inspired by years of reading comic books add to the whole surreal imagery to great effect. (It is worth noting, Matt created his first comic book at 11, so he’s been at this for a while).

Matt was quick to put together a list of songs he listens to in the studio. It’s an eclectic mix of upbeat punk rock (Against Me!, Refused, Dead to Me) to the more electronic leaning sounds of Washed Out, Diplo and LCD Soundsystem.

Check out the interview and playlist below.

First album you bought?
First Album I ever bought was Totally Krossed Out by Kriss Kross.

Last album you bought?
Dead Tracks 1&2 _by the Bronx

Who is your musical hero?
I think Lady Gaga is pretty incredible. She’s a huge mega-star and doesn’t seem to have lost her soul or independence in the process.

How important is music to your creative process?
Music is very important. My next exhibition, MOOD SWINGS…all the pieces are based off of some of my favorite punk Rock Songs. 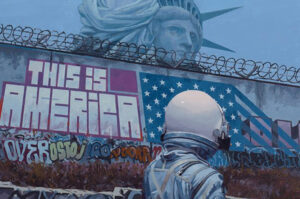 Scott Listfield’s paintings have recently taken on a new meaning for many people who follow his work. His paintings, which all feature some variation of